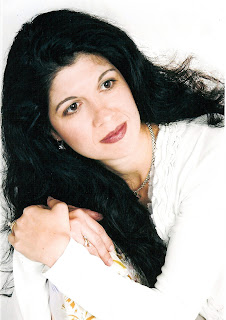 I'm thrilled to welcome Anna DeStefano back to the Playground! Not only is she a neighbor and fellow Southern girl, but she's fantastically talented and amazingly generous.  So grab a swing and give her a warm Playground welcome.

A Dark and Story Night. Happily Ever After.

What’s your favorite part of a thrilling story?

Best-selling, award-winning author Anna DeStefano wants to you stop, look, and keep digging, until you find the soul of your own fantasies. Her latest release, Her Forgotten Betrayal (available digitally and in print on June 15th), one of the launch books for Entangled Publishing’s Dead Sexy romantic suspense line, is a psychological thriller she hopes will creep you out (she’s really playing up the Gothic imagery and spooky nightmares with this one). But she’s also dying (heh) to inspire you with another of the happily-ever-after romance ending she’s famous for. No matter how moody the setting or impossible the dilemma, Anna’s characters and stories challenge you to hope and dream for your own exciting future, the way her strong heroines and hunky heroes do!

Join her today as she talks about her love for the extremes that compel her to write: all things dark and light, difficult and easy, those troubled beginnings and happy endings, and every struggle and triumph in between. Read on to discover what inspires her to create, then share what you love most in your favorite novels!

For more about Her Forgotten Betrayal, visit her Pinterest page (http://pinterest.com/annadestefano/her-forgotten-betrayal/), which Anna updates weekly with exciting articles, exclusive excerpts, play lists, and the images that inspired her moody, Gothic setting. And follow her to her blog (http://www.annawrites.com/blog), where she writes about a range of topics such as The Soul of the Matter, Dream Theories, How We Write, and Things My Teenager Says. Oh, and leave a comment in today’s Playground post, for your chance to win a FREE download of Her Forgotten Betrayal!

Thanks for having me over to play, ladies! You’re one of my most fun stops on every blog tour. It doesn’t matter what direction my latest release takes me, you’re always super welcoming and excited, and you make me smile for days and days. Here’s hoping you find as much joy in this post and my latest novel ;o)

Today’s question--What’s your favorite part of a romance novel: the fight or the finale?

I write about struggle and triumph with equal passion. I’m that kind of writer. I actually like the down-and-dirty fight and the black moment of every story, just as much as I do the thrilling, magnificent happy ending that my hero and heroine get to bask in when their work is done.

When I decided Her Forgotten Betrayal’s Shaw Cassidy was going to fight her way out of a passel of trouble, I didn’t waste any time throwing her into the soup. From the first scene, she’s been shot, but she can’t remember by whom. Actually, she can’t remember anything—not even the spooky family estate atop a winter mountain that she’s been exiled to, so she can get better. Or is the government that’s supposed to be protecting her actually investigating her, because they think she’s the traitor they’ve been looking for, someone who’s leaking national security secrets from her research empire to third world countries the US can’t afford to allow the upper hand. I gave her a stalker…or did I? No one believes she’s still in danger, at first not even the childhood friend who’s offering to help keep her safe—only he never seems to be telling her the truth, at least not any more of it than he absolutely needs to. Can she really trust anyone?

And Cole Marinos, our under-cover agent and Shaw’s former lover who’s volunteered to watch over her even though the past that nearly destroyed them once before still feels too close—he’s never let anyone or anything close enough to interfere with the completion of a mission. Just how long do you think I’m going to let that calm, controlled facet of his heroic but closed-off personality rock on, once he and Shaw are thrown back together?

You see, here’s the thing. I don’t find happily ever after endings nearly as satisfying to read, unless characters have been digging as deeply as they can to uncover the work they’ve put off doing for a long, long time. Individually and together, the most memorable heroes and heroines are the ones with the longest roads to healing those core places inside them that they’ve resisted facing.

Some authors write with more humor, some choose lighter themes than I do, but we’re all playing with emotion and growth and a character’s drive to embrace the hopeful future she’s always longed to live. Me, I like to feel everything I can, both the good and the difficult things, from the very beginning of a story.

I wanted to know what it was like for Shaw Cassidy to discover that the reason she couldn’t remember her life, just might be that the life she was fighting to return to had been a lie all along. And I wanted to feel what Cole Marinos feels, when he accepts that he has only himself to blame for not fighting harder for Shaw’s love all those years ago, no matter how much he thought at the time that she’d let him down.

These brave, riveting personalities are larger than life—this is a romance after all ;o) But I wanted my readers to find themselves in this story, too. I wanted to write another real journey, like all the other journeys I’ve created, that we can all learn from, while (I hope) Her Forgotten Betrayal’s spooky, Gothic, thrilling mystery and sexy love story keep us on the edge of our seats, wondering just who is toying with Shaw and setting both her and Cole up to lose everything they hold most dear—especially one other.

Join me this June for two dark and stormy nights, a day of shadows and shocking discoveries, an epic romance rekindled from the wreckage of the past, a truly terrifying villain hell bent on revenge, and a rich setting that comes alive in every scene, as Shaw’s mountaintop home at times seems to be literally trying to killer… But before you do, stop a minute in the comments and share your favorite part of a story’s journey: the stormy beginning; the heavenly happy-ever-after; or, like, me, all the emotional discoveries in between?

And before you go, check out Her Forgotten Betrayal’s cover copy and one of the great quotes it’s already received, from New York Times bestselling author, Caridad Pineiro

Remembering will save her life. But will the truth destroy their love forever?


﻿When the CEO of a global technology empire retreats to her ancestral mountain mansion to heal from a brutal shooting, she discovers the danger has just begun. Suffering from amnesia, she is at the mercy of nightmares that soon morph into something much more real...as well as a menacing stalker determined to toy with her sanity.

The FBI suspects her of illegally selling top-secret research, and has sent an agent to find evidence of her treason. She doesn’t realize the man who sweeps in from the cold claiming to be her protector—and her former lover—is keeping dangerous secrets from her. She begins to trust him, unaware that he is about to repeat the most painful betrayal of her past—a past she doesn’t remember...a past that may kill her.
Posted by Kira Sinclair - AKA Instigator at 5/10/2012 06:00:00 AM

Welcome back to the Playgrounda, Anna! We love having you visit.

I have to say that I'm a sucker for a happy ending - which is why I read and write romance. But that ending isn't nearly as satisfying without a good rollercoaster ride leading up to it. I'm an angst girl so I'd have to say the drama in the middle is what I love most.

Welcome, Anna. I'm excited to hear more about Entangled's new Dead Sexy line. I love a good thriller. And admittedly, even when I'm writing lighter stuff, I'm definitely a student of the "chase your character up a tree and throw rocks at them" school of writing. So I love the twists and danger of ripping apart everything you built. Knowing, of course, that it will all be better in the end.

Wow, what a turn! Love the story here. I admit, I read and write more on the lighter side, but I do agree that the struggle makes the payoff all the better!

And congrats on launching the Dead Sexy line. It sounds awesome.

I totally agree that a HEA is so much better when it's earned. I love to have my heroes and heroines have that Big Black Moment that they have to struggle through to realize what happiness is. And I love alpha males and strong heroines, women who don't faint when faced with a challenge. I'll be looking for these stories. Great blog.

I sure do love a HEA, but I also like for the characters to have survived a "train wreck" to get there. I think it makes the ever after a little happier.

HFB is a gothic suspense, with all the yummy psychological angst that goes along with that kind of thriller.

Dead Sexy is going to knock your socks of, Andrea ;o)

Isn't the knowing that the ending's going to work out well the BEST part, when a writer like me is torturing characters you love?

Desiree and "Problem Child"--Shaw's definitely a damsel in distress, but she kicks ass, too. So, even if you light ligher and stronger heroine's I think you're going to be rooting from page one of HFB ;o)

Oh, yeah! Gotta run them through the ringer, definitely! That's the part I love the most, partly because I know I'll get a reward at the end and partly because it gives me a true connection with that character. The more involved I am with them, the more I enjoy the story.

And I'm all for dark. The story I'm working on now has those gothic elements, so I'll definitely have to check this one out. Congrats on launching the new line!!!!

The struggle is what makes each book unique and interesting.

The "against all odds" factor makes the situation more lifelike. As we know "life is not fair".

All relationships
require some give and take.

Working hard to make something happen or last makes it sweeter when you succeed!

Sounds like my kind of emotional story, Anna. I like it angst-y from beginning to end; love to write that way too. Love when the emotions pull me in--and keep me in a story. Have to be careful when starting my day with those emotion joggers: one tear early in the day and my eyes hurt for the rest of it! Messes with feeding myself more angst, ya know?

Ya gotta love the struggle and the emotions. Gets me everytime. Thats what keeps me up at night reading till my eyes are bleary.
Anna, Just finished listening to your RWA workshop, great tips. Thanks.
Page Pennington